Explore support pages
Singer-songwriter Sigrid has traveled to Norrøna for the first fitting of her own GORE-TEX jacket. She can hardly wait to hold it in her hands after all the intense thought she's put into designing it. She is joined by her art director from Island Records, Charlie Drinkwater, who is ‘Head of Creative for everything that Sigrid does’, as she puts it.

Why does Sigrid's jacket have so much to do with her roots and where she's from? Why did it have to be an anorak? What role did her parents play, and what does the color red mean to her? We'll be letting you know all that and more in our interview with Sigrid and Charlie. 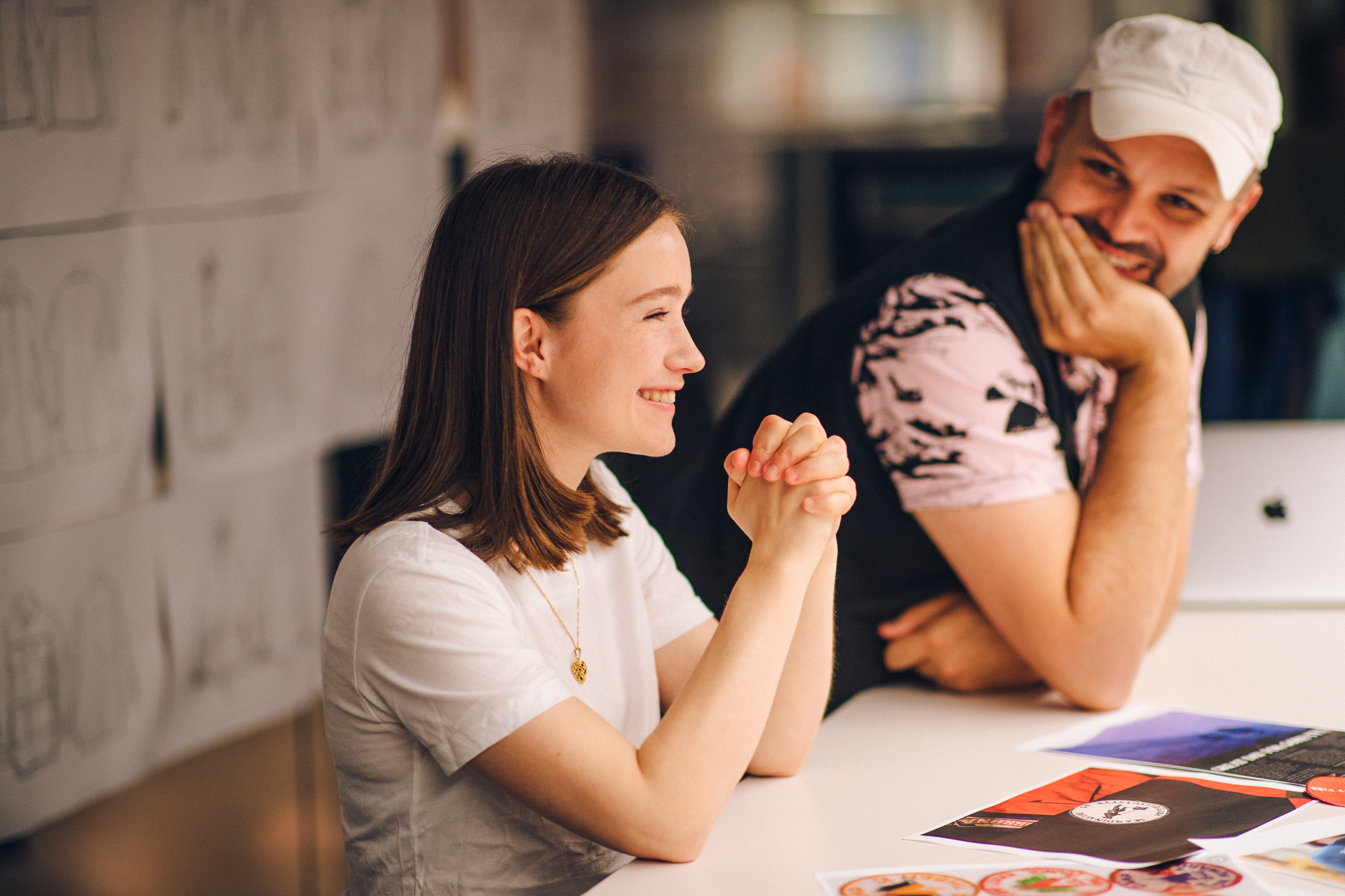 Sigrid, not many people have the chance to design their own jacket. What was it like for you when you were first approached with that idea?Sigrid: “I’m in music but the fact that I get to do so many other cool things through the music is really incredible, it’s a huge honor.”

How did you start designing your jacket?
Sigrid: “The start of designing this jacket was with, well how did it start? Probably first GORE-TEX then Norrøna and then I said I want to work with you on it, and then we started, and we had that talk discussing everything, and then I remember we made like a Pinterest of all the stuff and I was like, ‘Oh, I think this is the type of thing I want’ and I think that’s when my parents got a bit involved too. I made a mood board with a lot of more like 70s references, there were at the rock climbing base of Norrøna and it was really funny, first it’s like walking past the heritage wall here. It’s really cool, because those are the Norrøna pieces that I remember the most, because that’s one thing I really love about Norrøna and GORE-TEX is that you repair the clothes, so they’re going to last for many, many years. That’s how I remember Norrøna and GORE-TEX the most back home is that the clothes have been lasting forever. And of course my parents have also got newer clothes too, but like the old rucksack and the old Viking logo for Norrøna that’s the things I remember the most. So that was a huge inspiration for us getting the anorak.” 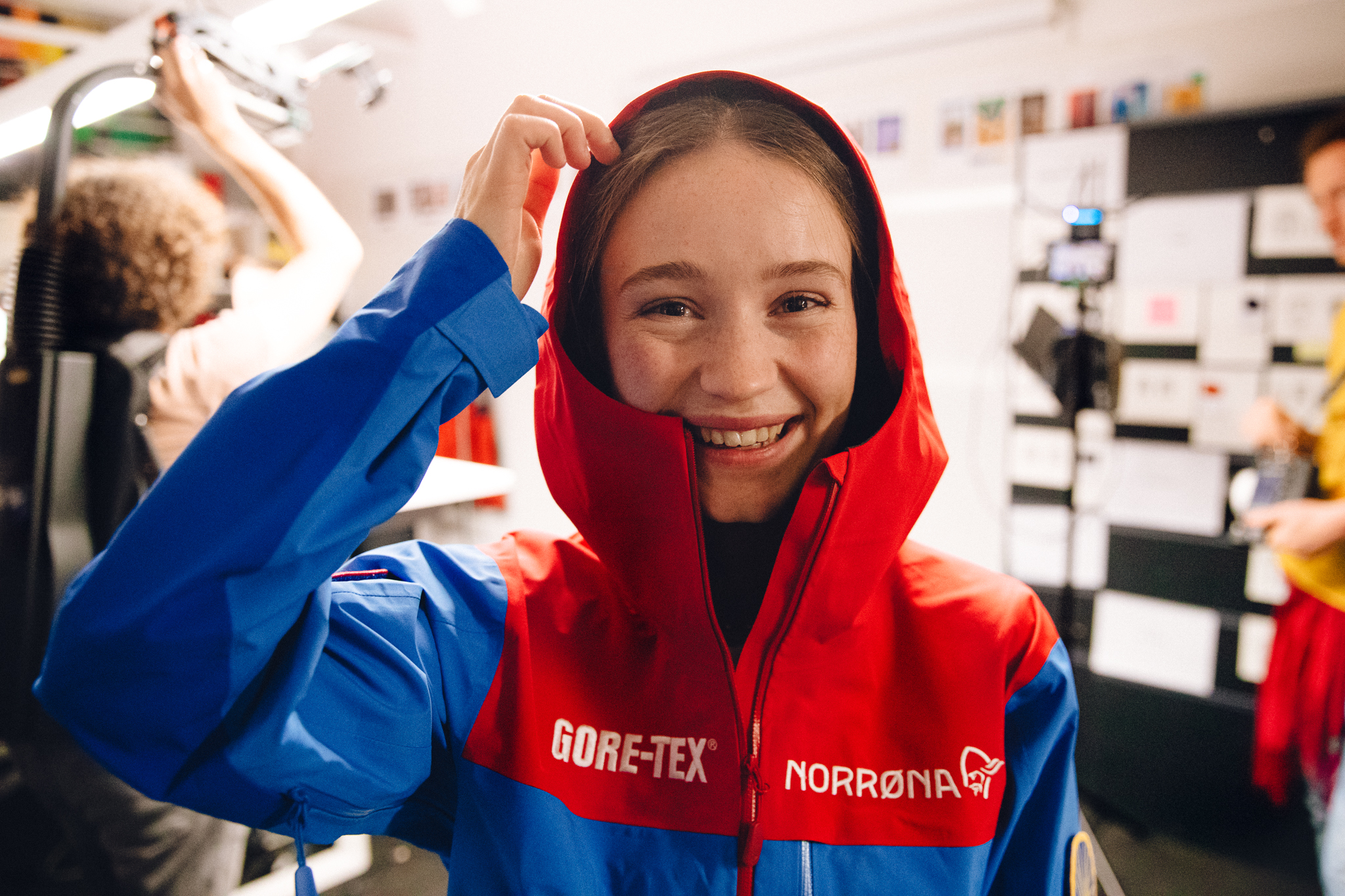 "It's totally cheesy, but hiking really made us closer."  - Sigrid.

Why did you decide on an anorak?
Sigrid: “I think the reason why I wanted to make an anorak was because that’s the one piece of clothing that really, really reminds me of hiking back home on Sunnmore outside Ålesund. I think it’s a super practical jacket. I love it. It feels cozy, warm, you’re a bit closed and it reminds me also of my grandparents. I know I’ve seen so many pictures of them skiing with anoraks too, and I also wanted to make it a bit more modern with the GORE-TEX technology, with the new fabrics. I am really, really excited to see that fabric and how that works with the anorak. I’ve mostly had cotton anoraks, so this will be really fun. Because that’s the one thing I didn’t really like about anoraks before, is that it’s not waterproof. So this will be a great hybrid.” 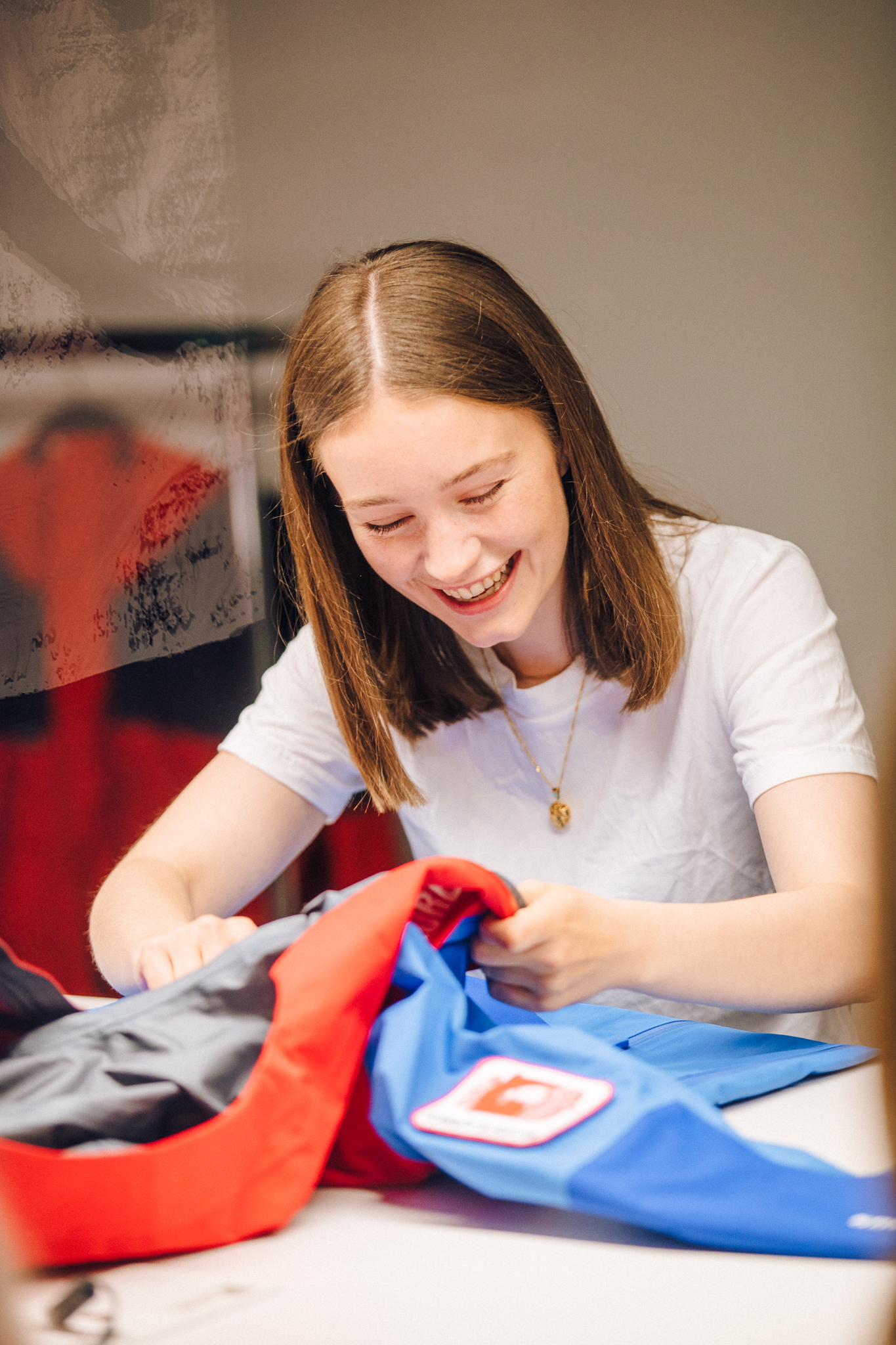 A large part of your inspiration for the style of your jacket came from your parents?
Sigrid: “Definitely. Umm, yeah. Mostly my parents. I remember growing up hiking wasn’t like my favorite thing to do. I can admit that. I really liked when I was out in nature and could hang out with my brother and sister. I’m the youngest one. And I think hiking made us—this is so cheesy— it made us closer. We didn’t have phones and that’s something I really appreciate now—to disconnect from everything, like losing your signal in the moment is actually really, really nice. So, yeah, all the hiking growing up has been a big inspiration and yeah then just seeing what my parents were wearing and I think my mom’s tips on like what is practical—she is the most practical person I know—she was like, “Don’t wear too many clothes. Don’t wear a thick woolen sweater underneath your GORE-TEX jacket. Wear layers.” That’s what she said. Those are the things that I remember and I use those tips daily.”

Charlie: “I think Sigrid, you are someone who lives in the city. You are around the world and in cities all the time. I think that was a really cool thing as well to think about, on how could we make something that has all this heritage and culture, but is also about the outdoors, but also hopefully kind of reflects who you are and what you do now. You could wear it going up the mountains, but you could also wear it at festivals.”

Sigrid: “Yes, it is super practical at festivals. Just put it on!”

Why did you decide on this kind of jacket?
Sigrid: “Again, back to my mom. So there is one thing my mom really hates about anoraks and also and it’s been passed along to me, and I might as well just admit it now, even though I’m 22. It’s that a lot of zippers just went down to her chest, so we wanted to bring it further down, ad make it  easier to pull over your head. It can be hard getting your arm out and everything, so the reason I wanted the zip to be longer is just that it’s easier to take it off and on, especially when you’re up on the mountain and it’s cold, it’s windy, maybe it’s raining. You don’t have time to be cold. Just make the transition as fast as possible.” 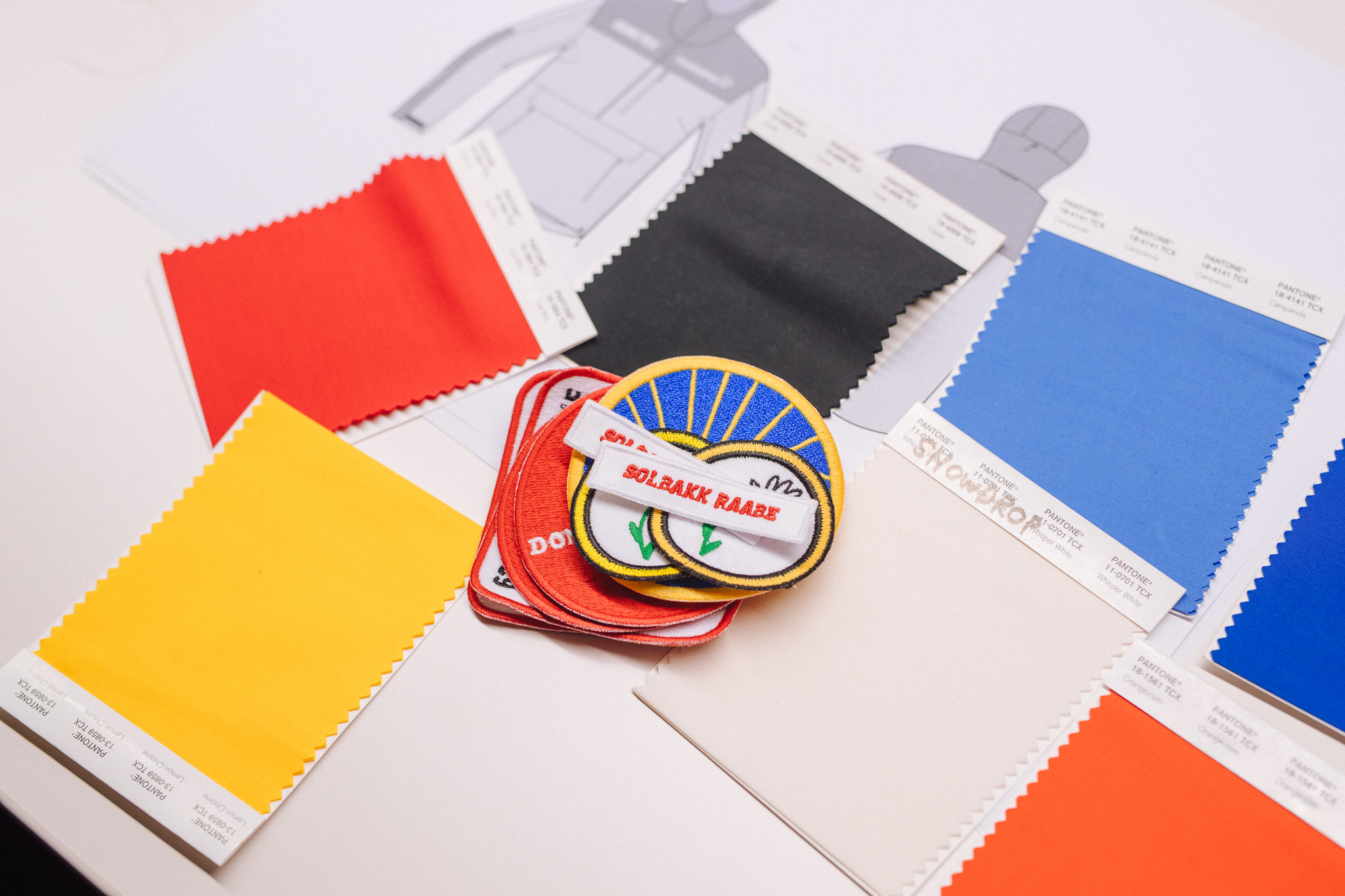 "I feel good when I wear the color red. Blue reminds me of where I'm from." - Sigrid.

Why did you pick the colors red and blue?
Sigrid: “I wanted to use more statement colors, but then I figured out I’ve always had a thing for blue and red. I love red and what it symbolizes, I feel very “me” in red. It’s such a strong color. In some ways it can be a bit cold, too, especially a bit darker red. It shows strength but also some trust in yourself, like a secure, self-confident color. And then blue just for me is like a very safe color, it reminds me …well, I come from a city with the ocean everywhere you look. It’s just five islands connected by bridges. That’s the city. So, having blue in it I think is really nice too and also I was thinking it’s going to look so cool in nature. I think it’s going to look great with green. It’s going to look good with white…”

Charlie: Also in the campaigns going on, Red is the color that is going through everything.
Sigrid: Yes, it is a color we always come back to.
Charlie: Red seems to feel very positive in a lot of ways.

Sigrid: “Red is positive but it’s still not reluctant. I don’t think red needs to be an aggressive color, it can be quite not chill, but do you know what I mean? It’s not a desperate color, that’s screaming for attention. It’s like sneakily very strong. But yeah, the reason why the album color of Sucker Punch is red is because the very first artwork Charlie and I made was “Don’t kill my vibe” and that was red, and the red jeans that are actually being washed in my apartment right now because I wore them to a festival last week, so yeah, the red jeans, the red “Don’t kill my vibe” the red wall behind me: that’s the reason why I wanted to bring the whole campaign together again with red on the album. And that’s probably why I wanted it red on this jacket, too.” 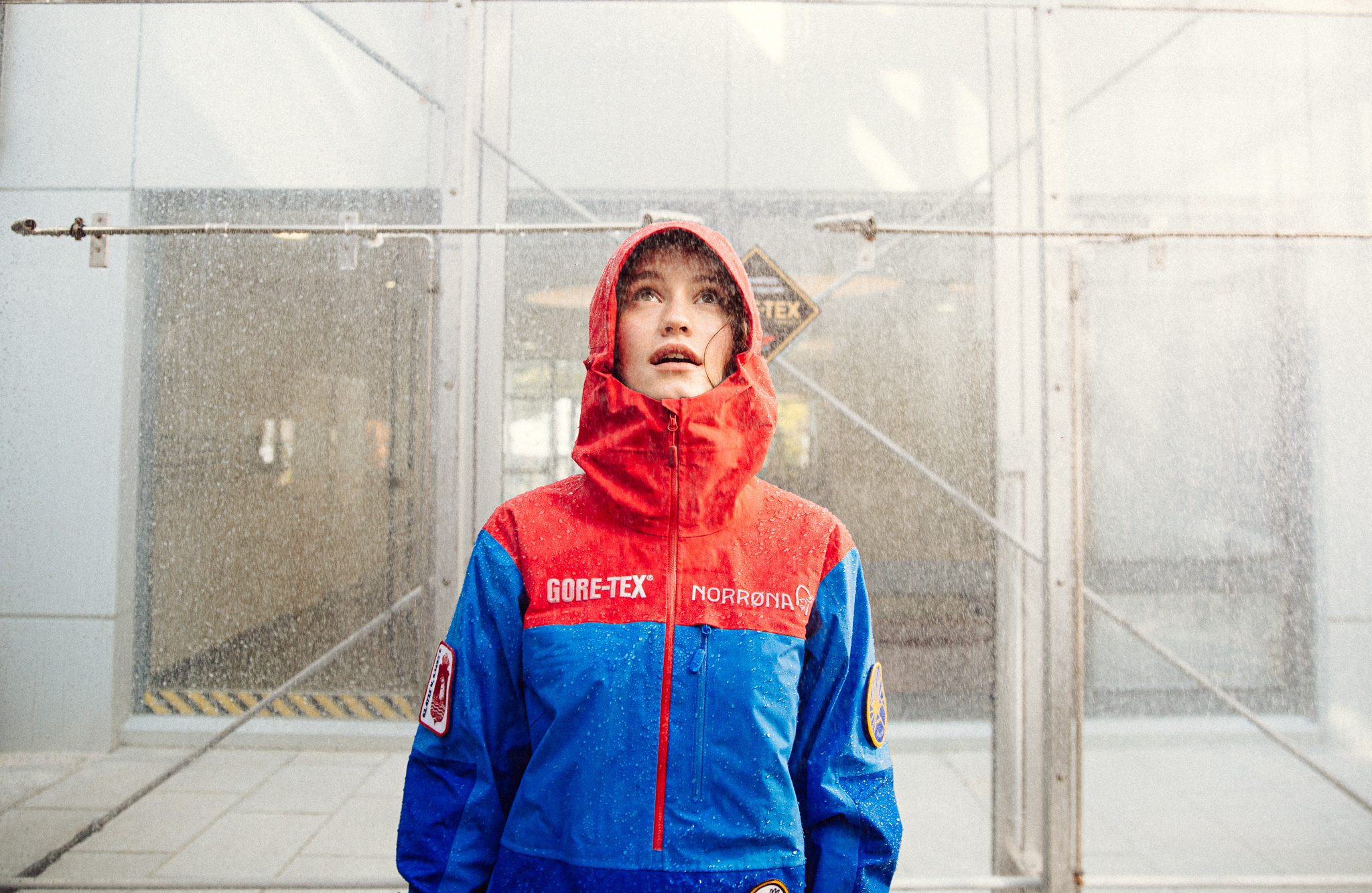 “I think everyone should do our little bit.” - Sigrid.

How important was it for your jacket to be made sustainably?
Charlie: “I think more than ever we should be conscious.”
Sigrid: “We should all be incredibly worried about the environment, so I think everyone should do our little bit.”

Learn more about our brand partner Norrona in this interview!