Explore support pages
We have a common dream: To explore Hawaii's most stunning trails by tracing the four elements of ‘Earth’, ‘Water’, ‘Air’ and ‘Fire’. We've written about our adventures so that we can share them with the readers of the GORE-TEX blog. Our first tour took us to Kauai, geologically the oldest part of the Hawaiian island group. For the past five million years, the Waimea River has been carving a deeper and deeper incision into the earth’s crust.

We have a common dream: To explore Hawaii's most stunning trails by tracing the four elements of ‘Earth’, ‘Water’, ‘Air’ and ‘Fire’. We've written about our adventures so that we can share them with the readers of the GORE-TEX blog. Our first tour took us to Kauai, geologically the oldest part of the Hawaiian island group. For the past five million years, the Waimea River has been carving a deeper and deeper incision into the earth’s crust.

A first test of stamina

Initially we were feeling rather nervous, but when we stepped out onto the rim and saw the Waimea Canyon in all its splendour those feelings quickly vanished. On all sides of the canyon, cliff walls in every imaginable colour extend down to the valley floor. Sunlight glimmers on layers of sediment, while elsewhere clouds cast shadows to create a magical kaleidoscope of colours. The Waimea Canyon is 14 miles long and about one mile wide. Author Mark Twain even called it the “Grand Canyon of the Pacific”. It’s one of Hawaii’s major tourist attractions, despite the fact that internationally it’s not quite as well known as its “big brother” in Arizona. 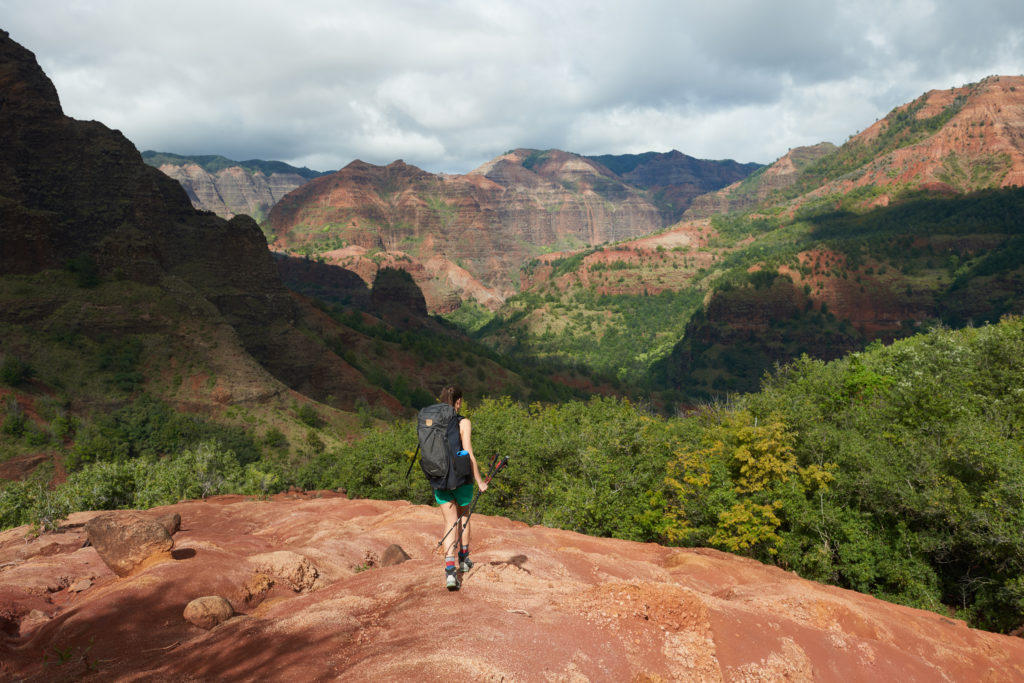 We’re about half way along the trail. Narrow and with lots of steps, the path winds its way downwards. When we’d parked the Jeep at the start of the trail, we were feeling excited and yet nervous at the same time. The two-day tour along the Kukui and the Koaie trails covers a distance of 12 miles and a cumulative elevation gain of over 900 m. The trails lead along the Waimea Rivera and through the canyon. First and foremost, this tour is a test of stamina. Neither going to the gym, nor regular running can prepare you properly for the unaccustomed strain of lugging a full backpack and the exertion of walking long distances over ungroomed terrain. But, it’s also a test of our equipment. We had spent many an evening at home thinking about what to take, spreading everything out all over our living room floor: a tent, cooking utensils, sleeping mats, camera equipment and backpacks. Also, GORE-TEX jackets and shoes to ensure that we would be well equipped for the multiple climates we were likely to encounter on the Hawaiian Islands. 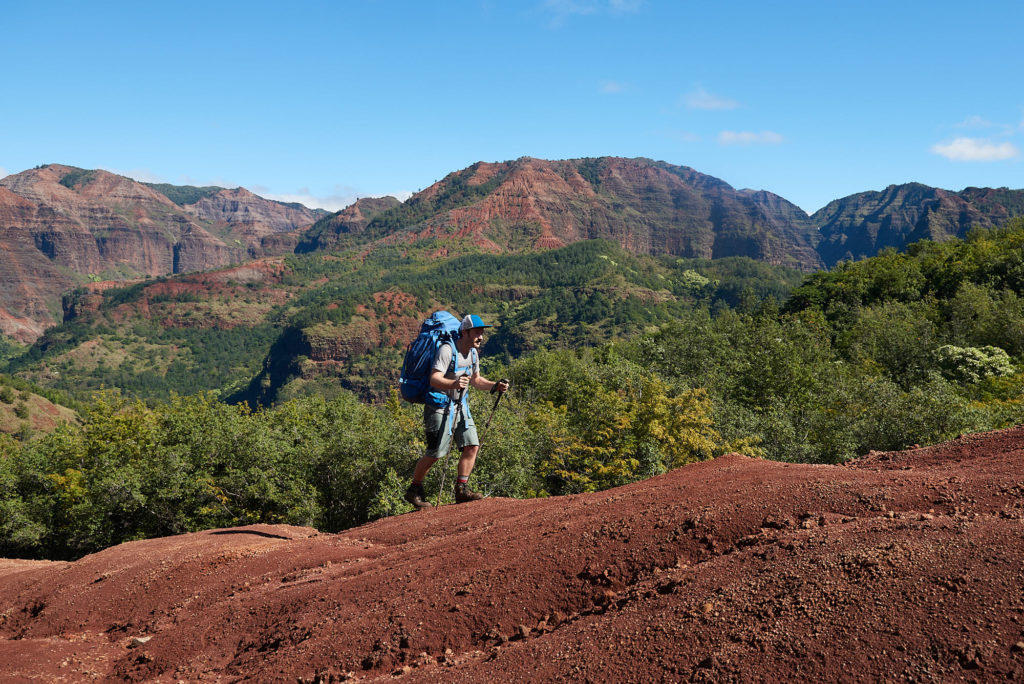 On this part of the trail, the red earth is dry and coarse. On the sloping trail with its loose sandy soil, it’s only too easy to slip. We’re glad our hiking boots have a good grip and that we thought of bringing poles. The soft clay soil underfoot makes you feel that the next dose of rain could wash the whole island down into the depths of the canyon.

As she passes us, a hiker walking in the opposite direction warns us that after heavy rain the water level of the river at the bottom of the valley is higher than usual and possibly impassable. “Chocolate milk,” she adds, giving us a grin and telling us that she hadn’t even attempted to get to the other side of the river. Hipalau, our camp for the night, is the third of the four camps in the canyon and situated on the other side of the river. Shortly before reaching the valley floor, the trail crosses a wooded area. From one minute to the next the trail becomes wet and muddy. Suddenly, we find ourselves up to our ankles in thick, sinking mud that sucks at our boots. Thanks to our waterproof hiking boots], even after tackling this section of the path our feet are still dry. 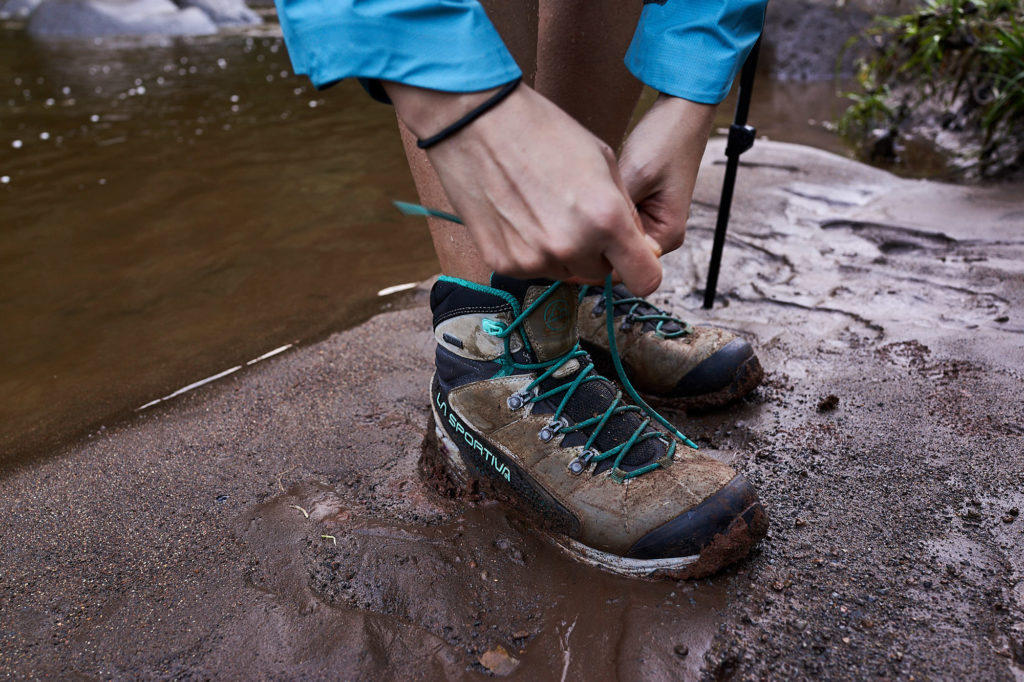 The next thing we hear is the mighty roar of the Waimea River. Chocolate milk is rather a tame description for what we now see. The red earth of the canyon has dissolved in the water and the murky mass is gushing past us. Camping here isn’t an option. We are adamant about reaching our destination. As the river is so deep that water would get in through the top of our boots and we don’t want to get blisters from walking the last few miles in wet boots, we decide to try crossing the river barefoot. In the middle of the river the water goes up to our knees and the current is so strong that it isn’t easy to keep a firm footing, even with the help of our poles. The tension wanes as we realize that we’ve passed the deepest part of the river. We reach the Hipalau Camp as dusk is falling. 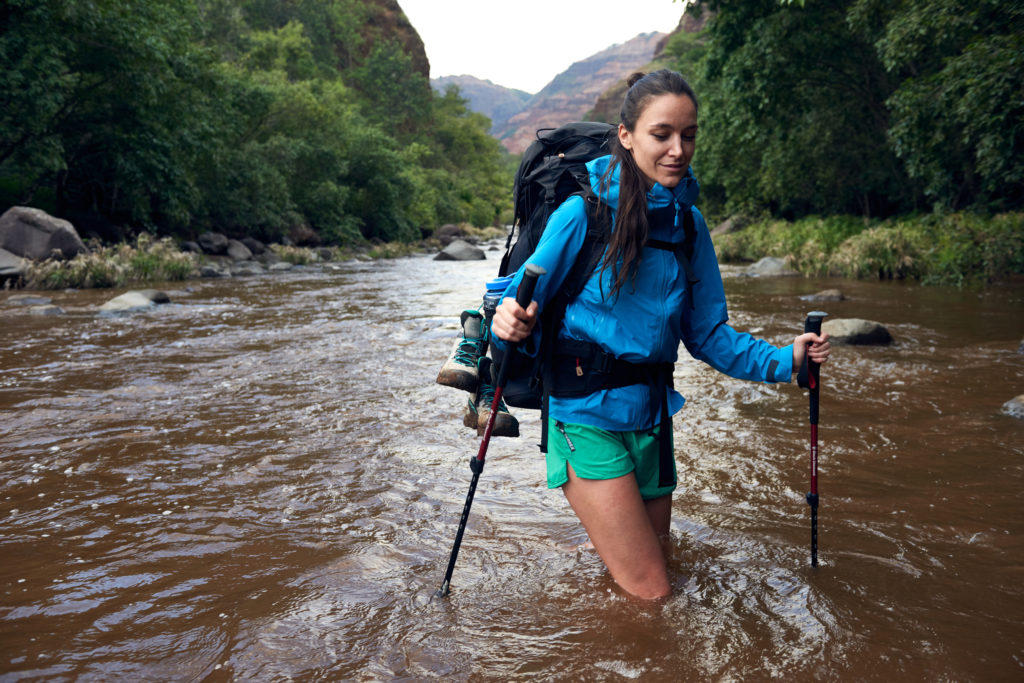 Out of the chasm

The next morning we’re up with the sun. We can’t wait to see more of the canyon’s spectacular landscape. The air is cold and damp. The path along the side of the river gets narrower and narrower. Grasses and shrubs have grown into the path and slap against our arms and legs. Glistening droplets of dew bead up and roll of our trousers and jackets. Soon we are completely caught up in the sight of the cliff walls glowing in the early-morning sun – our reward for getting up early. At this point the cliff walls are almost 3,000 feet high. On our way back, the river is much lower than it was the day before and the crossing is far less worrying. In fact, it provides us with an opportunity to cool off before we start the steep uphill climb. After a couple of hours, with the sun blazing down on us, the great chasm of the canyon spits us out onto its rim. 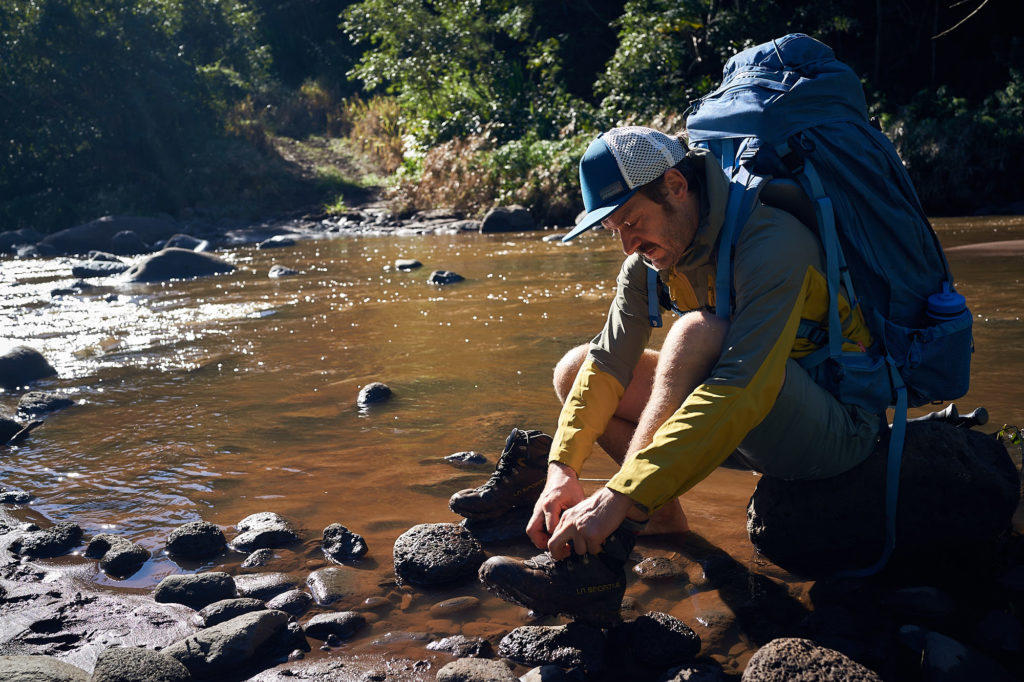 As we discovered on our first tour and were to fully comprehend on subsequent tours, the earth and the multitude of different colour experiences it offers is just one example of the enormous variety of powerful impressions that makes trekking on the Hawaiian Islands so worthwhile. We are already hooked. Over the next few weeks we can’t wait to find out what else these islands have to offer. What was your most enjoyable back to nature experience relating to the element of ‘Earth’? Tell us about it in the comments.